If we tried to explain what OpenFlow is, a possible definition would be: OpenFlow is a protocol for controlling and interacting with forwarding behaviors of switches. It allows us to dynamically control  the behavior of the switches in our network. Many SDN (software defined network) and Open Source projects use OpenFlow or support it as a plugin, such as OpenStack Neutron and OpenDaylight.

But It’s hard to grasp what it is, what it solves and how it works only using this brief description. In order to truly understand what is OpenFlow, we need to start from the beginning, before SDN era.

Note: I’ll not deep dive into SDN as this post is not about ‘what is SDN’, but I’ll cover it quickly since it’s crucial for the understanding of why OpenFlow is needed and what it is used for.

Before talks about software defined network started,  a traditional network would look something like this:

You can see four switches while  the control plane and data plan are local to the devices.

A control plane considered to be the  brain of the device. It’s responsible for all the data plane activities, which are not related to the end-user data packets. Such activities are creating/managing local routing tables and setting packet handling policies.

The data plane is how packets are forwarded through the device. For example, a packet arriving the first device, needs to know how to continue its journey to the destination (e.g. through which port to exit).

So in a traditional network each device has its own “brain” (control plane) and a data plane. There is no single device who can “see” the entire network. From an administration point of view, you would need to connect to every device in your system (in the drawing, it’s only two, but in reality it can reach thousands of devices) and configure each one of them, in some cases, manually.

To move traffic, each device would need to communicate with other devices to get an updated view on the network topology and choose the best way to forward the packet.

Beginning of a new era – SDN

One of the main concepts SDN introduced,  was to centralize all the control planes into one device which is called the ‘controller’. The controller has the visibility of all the network and this visibility allows it to make smart decisions on how to forward packets. So the controller can send instructions to the different switches, to tell them what to do with incoming packets (e.g. drop, forward through port X).

It is also called “SDN controller.”

Note: regarding SDN, this is really just the tip of the iceberg. To learn more about SDN, I recommend to watch some of the videos I gathered right here. 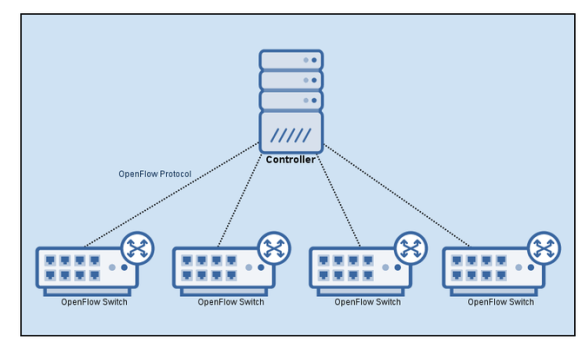 Why do we need OpenFlow?

So we understand why we need or more importantly why we want one centralized controller, but how will this controller communicate with all the switches? the answer is OpenFlow.

OpenFlow has several roles in this new structure:

Let’s have a look at OpenFlow switch components:

We’ll cover each one of them in more detail.

An OpenFlow switch holds one or more flow tables.

When a packet arrives to the switch it processed by the first table. If the packet doesn’t match any flow entry, it’s called a table miss. The packet can then either be dropped or passed to another table. It depends on configuration.

It can be one of them or a combination (e.g. change the packet, and move it to table X)

There are additional fields such as counters and flags, but Match fields and priority are what makes a flow entry a unique one.

Group table is like a special flow table. It consists of group entries which include action buckets and an identifier.

The identifier is an 32bit integer to uniquely identify the group table and the action bucket is a set of actions to execute.

To better understand how it looks when a OpenFlow switch is used, we’ll use an example of a flow in which we are reaching out to a web server (Host 3) from Host 1. 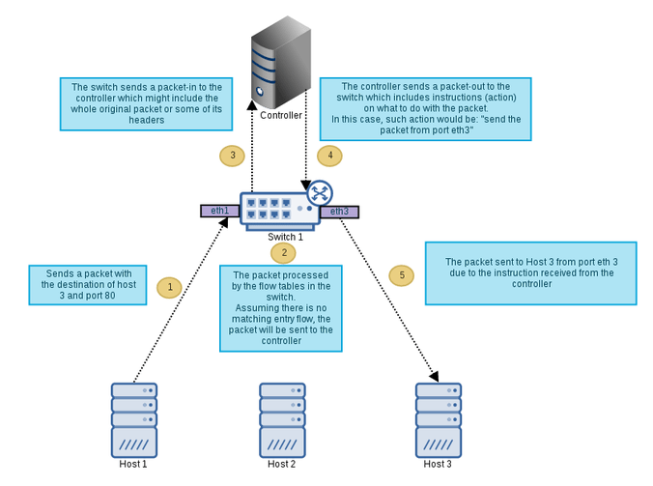 Notes about the flow: 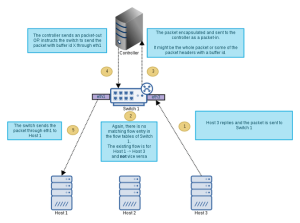 Notes about the flow:

After a packet sent from Host 1 to Host 3 and a reply received from Host 3 by Host 1, any future communication can be done using the flow entries installed by the controller. There is no need to send more packets to the controller unless there is a new type of communication.

You don’t even need to contact the controller if the flows are inserted before the communication starts. We’ll see in a second how to insert new flow entries by ourselves.

Many solutions/products today use Open vSwitch together with OpenFlow. Take  for example OpenStack and OpenDaylight.

In order to understand  the network flows and to be able to troubleshoot issues in such environments, you need to be familiar with Open vSwitch and OpenFlow related commands. Open vSwitch already covered in previous posts. In the next following lines, I’m going to cover ovs-ofctl specifically.

ovs-ofctl is how you manage, operate and monitor OpenFlow switches.

First command you want to be familiar with is ‘ovs-ofctl show <switch_name>’. It will print information on the switch and its ports in addition to limits such as number of tables and number of buffers.

Let’s see an example from a TripleO setup

It gives us a lot of information such as switch capabilities (note that it supports FLOW_STATS), actions and ports. We have 2 ports, the same you’ll see if using ‘ovs-vsctl show’ but here the information is a little bit different (MAC address, config, state and the speed of each port). The third one is the switch itself.

We added one entry flow without any match fields and with the action ‘normal’. The ‘normal’ means our switch will act as a traditional layer 2 switch.

We added a new flow. This flow has a priority of 400, so if a packet matched several flow entries, with lower priorities, it will be processed by the one we added. We also set a match field ‘in_port=1’ which means packets that arrived through port 1. The action is to output the packet through port 2 (‘actions=output:2’). To verify it actually works, I recommend to test it by sending something to port 1 and see it go through port 2 by looking on the counter or “sniffing” the network with tcpdump.

To remove all the flows

You can specify a specific flow you want to remove, right after the name of a switch.

Prints all the flow entries in the specified switch tables. Let’s again add a simple flow (after we removed everything) and see how it looks in our switch

You can see two flow entries. One was there by default when the switch created (the with idle_age=556). The second is the one we added earlier.

For each flow entry you can see the duration of the time it’s there. To which table number if belongs (table=0) how many packets matched the entry flow (0), the idle_age which represents the age of the entire flow without being matched to any packet, the priority (if specified. we haven’t specified one when adding the flow) and the actions.

That looks pretty empty and boring for a new switch, right? let’s look on the switch TripleO created (specifically br-ctlplane)

Three flow entries, still one table, but look how many packets matched each flow, especially the third one (779256). We can also see new actions. For example, first entry which includes now “strip vlan”, so whenever a packet hits this entry, its vlan header will be stripped off. For the second flow entry, we have ‘drop’ which means that when a packet matches this entry, it will be dropped.

Finally, I really recommend to read the OpenFlow specification. It’s great and has very detailed information on OpenFlow.

Here is the specification for 1.5.1. Make sure to check if a newer version is available.